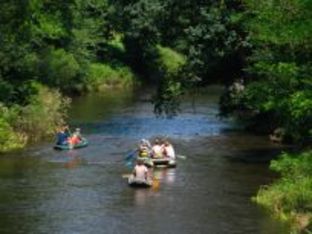 Mała Panew, one of the most picturesque rivers of the Opolskie Voivodeship, is one of the greatest tourist attractions not only of Kolonowskie commune, but also the whole region. This river more and more often known as the Opole Amazon, as one of the few in Poland retained its properly intact, natural character.

But Mała Panew is not only almost fabulous landscape, but also the diverse plant and animal world. In the current of river in several places occurs a rare species of water plant - Intermediate Water Starwort Callitriche hamulata (rate of pure water), while in the woods and bushes on its banks grow among others: Scouring Rush Equisetum hiemale, Columbine Meadow-Rue Thalictrum aquilegifolium, Tufted Loosestrife Lysimachia thyrsiflora, Danzig Vetch Vicia cassubica L., and protected Common Polypody Polypodium vulgare.

The world of animals is not less rich than vegetation. Stone loach, Otter and Beaver are just some of the animals living in Mała Panew.

Over a hundred meanders, sandy sandbanks on both river banks, old river beds and beautiful landscapes that real paradise for lovers of canoes. Experienced canoeists say that Mała Panew river has some features of the mountain river, and it is a real sensation in areas such as Opole Plain. 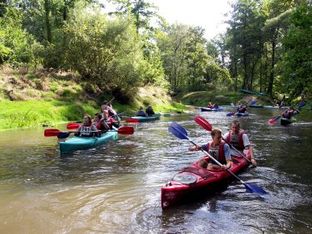 Currently, within the project co-financed by the European Union “Regional Tourist Centre Mała Panew Valley”, on the river are built canoeing camps. They are created in municipalities: Kolonowskie, Ozimek and Zawadzkie and will be ready this year. Thanks to them to the municipalities should assemble the canoeing enthusiasts not only from Opole region but also from the neighbouring voivodships.
Camps will have respectively umbrella roofs, field kitchen, parking and campsite. On the river banks will be placed signs informing on which kilometer the canoeists are and what is worth seeing in a particular place.

Ideal way to acquaint oneself with the advantages of Mała Panew river, is canoeing one of the four routes:
A. Krupski Młyn – Zawadzkie: difficult route, many obstacles. It requires a good physical fitness. Duration about 5-6 hours (16 km).
B. Zawadzkie – Kolonowskie: very picturesque route. In the whole runs through the forest. It provides many impressions. Duration about 4,5-5 hours (12 km).
C. Kolonowskie – Ozimek: easy and pleasant route, but with many river bars that require transfer of the canoes. Partly regulated river. Duration about 3,5-4 hours (15 km).
D. Ozimek – Turawa: easy route, but requires physical effort – can be expected the wind causing the waves. Duration 3-6 hours (depending on the force of the wind) (12 km).